History of the Buildings

History of the King’s Hall and Winter Garden

In November 1903 Ilkley Council advertised a competition with £100 prize to design a town hall, library and theatre. There were sixty entries. In May 1904 the winner was announced, William Bakewell of Leeds for his plan entitled ‘Economy.’ The estimated cost of Bakewell’s design was £13,000. It was to be financed from £10,000 on a 30 year loan and £3,000 from American philanthropist Andrew Carnegie. A further loan of £2600 was later agreed for furnishings.

It was a time of economic depression so the contracts stipulated that workers should be paid at not below the local rate. The mason was bound to buy the stone from the quarries on the moor.

Cllr. T J Jackson laid the foundation stone in 1906 and he opened the Town Hall on April 27 1908. On May 6 1908 the Council had their first meeting in the Council Chamber. They had visited other local town halls and liked the recently rebuilt Batley council chamber so they had ordered furniture from Waring and Gillow of Lancaster. 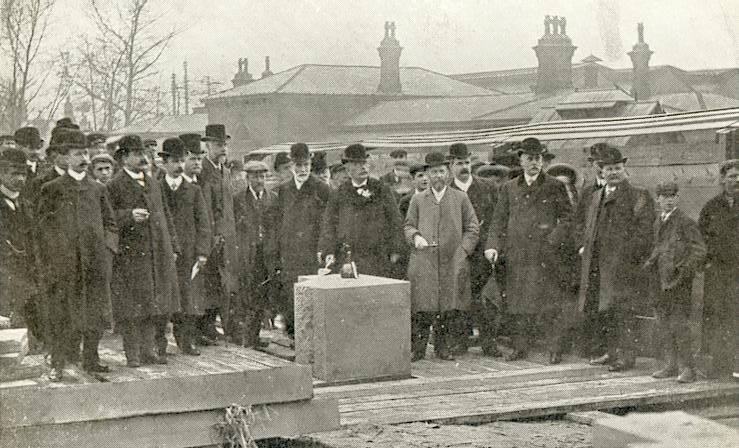 The Council continued to meet here until 1974. From then Ilkley Parish Council has used the room. It still retains its original furniture and features of oak panelling and central lantern light.

The Library has been reorganised over the years to reflect changing ideas. Dr Collyer’s illuminated scroll was sent to the Library in 1969 and is on display there. The Museum above the Library was closed during World War Two when the room was used for organising war activities. After the War the Museum reopened for a while, then in 1961 moved to the Manor House Museum and Art Gallery off Church Street. 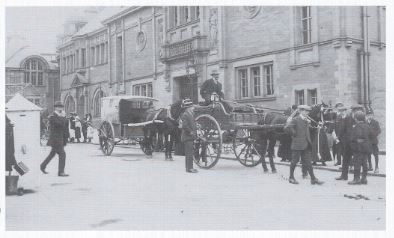 A Procession outside the King’s Hall in 1911

The Kings’ Hall was well used from its opening. Cllr Jackson arranged for the first 3 days ‘The Belle of Mayfair’, which was free for  rate payers. This was followed by a fancy dress ball organised by Ilkley dancing class tutor Mr Godwin with a special Olicana dance devised for the occasion.

Adela Pankhurst addressed a suffragette meeting here. General Booth of the Salvation Army came to speak at a rally as did General Baden-Powell at a scout rally.

The Wharfedale Music Festival which began in 1906 has met at the King’s Hall since it opened.

With the growing interest in moving pictures in 1910 cinema equipment was installed. 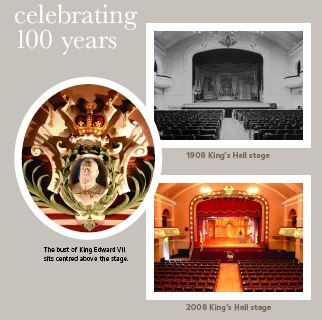 The pictures to the right show the King’s Hall stage separated by 100 years – have the chairs really changed?!!!

Also shown is the bust of King Edward VII which is centered above the stage.

Local plasterer (Oswald Lister of Poplar Grove, Tivoli Place) made plaster heads of 13 artists, musicians and playwrights and these appear on each of the boxes and the front of the balcony. Can you name any of them – click here to find who they were. 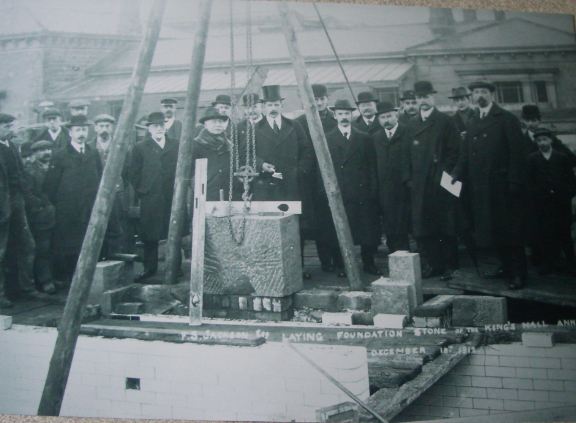 Ilkley Round Table staged many professional music hall shows at the King’s Hall from 1963, based on the BBC’s Good Old Days. The Friends of the King’s Hall and Winter Garden was set up in 2000 to work in partnership with Bradford MDC and they have raised money to fund many improvements.